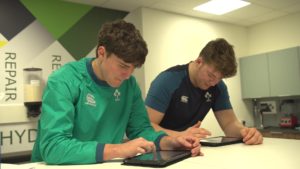 Having made his first Ireland Under-20 start against the Baby Blacks at last summer’s World Rugby U-20 Championship in Argentina, Max O’Reilly is eager to add to his international experience when the Six Nations begins later this month.

Dublin University full-back O’Reilly was a late call-up to Noel McNamara‘s squad for the tournament in Argentina and after winning two caps, is one of seven players back in Ireland’s extended panel for the 2020 season.

The 19-year-old, who is also an Ireland Sevens international and featured for Ireland Men’s Development in Dubai before Christmas, is pushing to make McNamara’s final squad for the Six Nations, which will be announced on Monday, January 20.