U20s in second All Ireland Final in a row…. 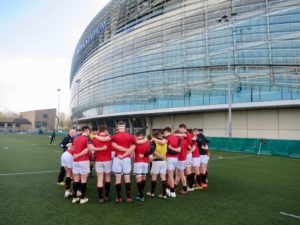 It was a busy day for Trinity rugby followers yesterday (Saturday) with Trinity Seniors finishing off their regular league season with a convincing 39-22 over 5th place Garryowen. The Seniors now play Cork Con in a historic first league 1A Semi Final on Sunday April 28.

The clubs supporters made the short trip up to the Aviva Stadium back pitch, the home of powerhouse Lansdowne U20s, for a 5.30pm KO. Trinity were out to defend their title that they won last season. The two teams had played twice before this season in league play with Trinity shading their near neighbours in both tough close encounters. This was the All Ireland U20s Semi final game and both teams were out to take the next step.

The wind on the back pitch can be difficult under the massive shadow of the main stadium and yesterday was no different as at times it felt that the wind was going at different directions at the same time according to where you were on the pitch! Trinity played into the strong gusting wind in the first half. They dominated position and possession in a great exhibition of ‘into the wind’ rugby with Second Row Adrien Binder, *8 Matthew Martin and flanker Adam Corcoran all carrying strongly. In the 10th minute after several phases in the host’s half industrious hooker Steve Gray crashed over the line. Unfortunately, that was the end of the hooker’s game as he took a bad ‘stinger’ on the shoulder while scoring and would play no further part in the game.

Despite dominating possession of the ball, Trinity however were very sloppy in their own half and would twice give up ball close to their own line and Lansdowne eagerly pounced to score two tries and a penalty in the first half. Crucially Trinity did score right on half time to close to 17-14 when they camped close to the hosts line and eventually crashed over with their forwards.

In the second half with the considerable wind at their backs and with the majority of the ball, Trinity struggled to play the ball down into the Lansdowne half accurately. The home team came more into the game and played some good attacking rugby making several line breaks. Both teams attacked at every opportunity in what was a great advert for U20s rugby. The home team was very clinical, and it seemed every time they got into the Trinity 22 metre zone they came away with scores.

With 20 minutes gone on the clock, Lansdowne had built up a 29-19 lead with two well taken tries and a penalty. With only a well-orchestrated set move try by wing Liam McMahon, after a break by full back Andrew Hogan, the only score for the students.

Trinity did not panic, they managed the game expertly and they kicked two close range penalties by Micheal O’Kennedy to close the score to 29-25. The teams continued to attack each other with ball in hand in thrilling ‘end to end’ rugby.

As the clock ticked down to the final minutes, the home team started to play ‘keep ball’ and the outcome looked ominous for the students – but crucially Lansdowne, under pressure, kicked one last ball to Trinity. The students went to work with the best set of phases of the game. They moved the ball far right and then back to the middle of the field – the backs then ran a beautifully executed phase play which put captain James Moriarty into space, James in turn off loaded to full back Andrew Hogan on his shoulder… Hogan sprinted clear before passing to wing and speedster Paddy Opperman who raced in under the posts for a fabulous (for Trinity) but heartbreaking try for the home team. O’Kennedy kicked the conversion and the referee sounded the end of the game to raucous celebrations for the players and supporters of Trinity.

Trinity now face Munster champions UCC who beat Leinster champions Clontarf 29-28 in the other semi Final. The game will be on Easter Saturday at Naas KO 5.30pm