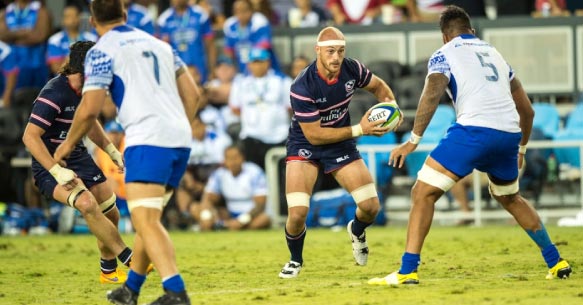 USA flanker Scott LaValla has confirmed that he is retiring from international and professional rugby.

LaValla was the subject of some rumors about his retirement from the game earlier in the year due to a couple of quasi-humorous interviews given by his teamates at his pro club, Stade Francais. But it’s not clear if those interviews were just jokes, or somehow a harbinger of a decision LaValla seems to have been mulling for a while.

LaValla was set to represent the Eagles in the 2015 Rugby World Cup, but missed the tournament due to a broken elbow. He is still rehabbing that injury and has returned to his hometown of Olympia, Wash. to do just that.

A product of the Budd Bay Rugby Club in Olympia, LaValla was captain of the USA U19 and U20 teams under Salty Thompson. He attended Dublin University where he was a four-year starter there, acheiving the unheard-of honor of being an American voted captain of the Trinity (Dublin University) rugby team. He also got to meet Queen Elizabeth II on the monarch’s visit to the school.

LaValla then signed with Stade Francais. He captained the USA Selects in 2008 at the age of 20. He made his full Eagles debut against Russia in Glendale, Colo in 2010, just a month shy of his 22nd birthday. All in all he logged 33 caps, 29 of them starts, mostly at flanker but also at lock. Considered one of the smartest Eagles and one of the team’s best leaders, he broke his elbow leading up to the USA’s World Cup warmup game against Australia, and was ruled out of the World Cup.

LaValla confirmed his decision to retired but did not discuss specific future plans.